The 2021 Arvada Harvest Festival "Status Report" and more details are posted below. We will need your community support to revive the Festival for 2022 and for future generations to come!

"SAVE THE ARVADA HARVEST FESTIVAL"

Please sign and forward to others through social media, e-mails, and any other means.

Making the BEST memories for generations of Arvadans at the Harvest Festival for nearly a CENTURY!

We are so deeply saddened to announce to all of the hard-working volunteers, gracious sponsors, and of course, our tens of thousands of beloved attendees that our 2021 Harvest Festival is NOT going to happen this year.
Incredulously, just three weeks before the Festival was to begin, the officials of the City of Arvada destroyed our ability to hold this event - including the parade. Their actions that negated the financial support needed -- made it impossible for the Harvest Festival to take place.
BACK-STORY - The festival was created to celebrate the first paved road between Denver and Grandview Avenue in Old Town Arvada.  This last spring the City officially banned the Harvest Festival's long 90+ year successful location.
We were given no other alternative but to relocate the event to a site recommended by the city officials.  The city hand-selected the new site to be Wolff Park - at 57th Ave. and Carr St.
With this newly approved site, the Harvest Festival Committee began the hundreds of hours of volunteer work, over the spring and summer months to overcome the myriad of obstacles ranging from electrical generators to street lights to a stage to placements of booths and the carnival rides, to traffic flow and parking, and the many other items necessary to accommodate this three-day event.
THE KICKER. Unaware that the city had not even discussed the event with the neighborhood surrounding Wolff Park until just three weeks before the festival was to occur, we received an unapologetic call from the city - stating the ONLY part of the Festival we could proceed with was the parade.
SHOCK WAS AN UNDERSTATEMENT - This was uncalled for and perhaps deliberate.  Our Harvest Festival organizing committee was dumbfounded and at a complete loss for words!  The City's actions completely destroyed our ability to fund the event, by denying both of the two critical economic components -- the midway booths and the carnival.  All the events were under one single permit however the City thought they could approve one aspect in the permit and deny the rest.
The manner in which this had been done, after forcing the festival out of its 90+ year successful location, is something the residents of our community need to take seriously.
Their actions have damaged the festival's reputation with civic groups, hundreds of volunteers, schools, businesses, sponsors, non-profit groups,  donors, and the thousands of Arvada attendees!
Why the City would wait until three weeks before this historic event was scheduled to take place, affecting so many tens of thousands of Arvada citizens, rather than addressing that in March is simply unprofessional at best.  Everyone needs to ask themselves why a handful of city officials have literally destroyed Arvada's largest and longest-running BELOVED community event.  These actions have resulted in a very painful and unavoidable decision, leaving the Harvest Festival committee with no option but to cancel this near century-old event.
Again, with the greatest heartfelt sadness, we apologize to our many sponsors, civic groups, non-profit groups, supporters, donors, organizers, all the valued community attendees that look forward to attending every year.
For further details and updates which will be announced ongoing, we encourage you to check back on this site at your convenience.
We also greatly appreciate your signing our petition and contacting council members and the city manager to let them know that the Harvest Festival in its entirety (parade, booths, and carnival) matters to you, your family, your businesses, and our community.
We cannot continue our community's biggest and oldest event without your support!  Again, more details about how you can help to be posted here soon.

Voted Best of the Best in Arvada- by citizens! 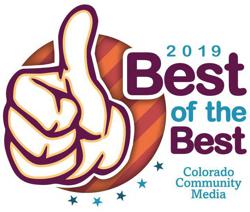 Thanks to all our faithful festival friends, the Arvada Harvest Festival has always been voted the "Best of the Best" honors in a vote from Arvada citizens conducted by the Colorado Community Media year after year and once again in 2019.   We have always been voted as Jefferson County’s “Best of the Best” too.  Since 1925 this Festival has been Jefferson County's biggest and oldest community event.  Yay!!!...Thanks Folks!

There’s one simple reason we’ve always been voted as the “Best”…it’s because we are!

Our 2021 AHF event request has been officially denied by the City of Arvada.  "A very sad state of affairs in our Arvada community for our near Century-Old event.  Our volunteer Harvest Festival Committee offers the community our deepest and most sincere apologies for the city's actions. 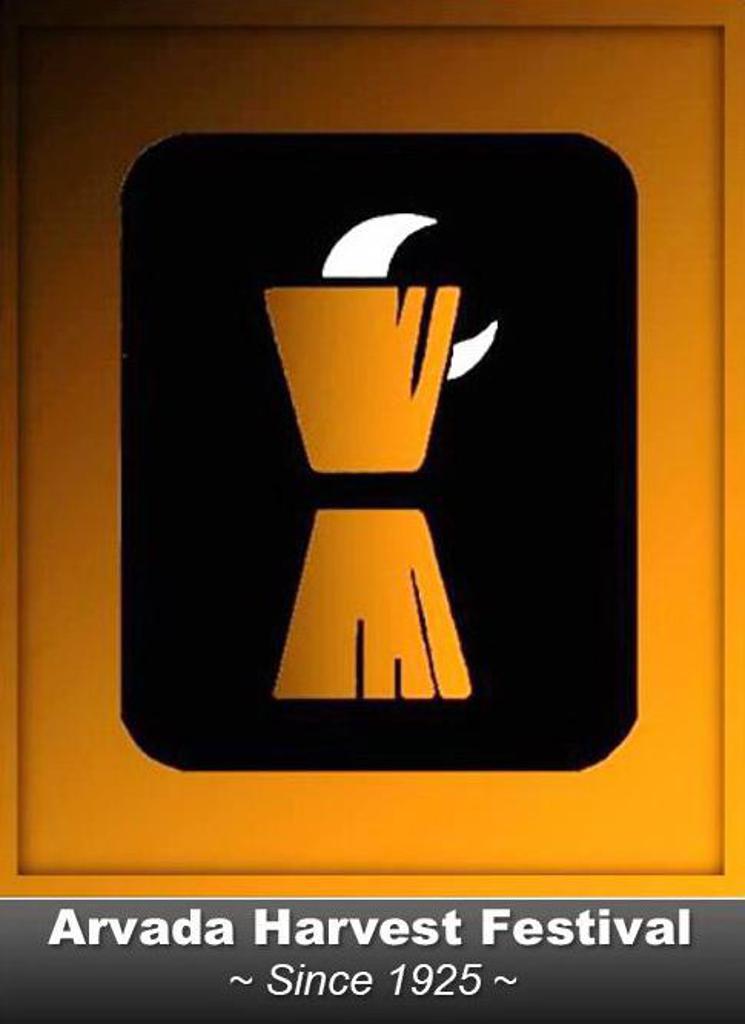 The Arvada Harvest Festival and Parade commemorate the hearty history of the once primarily farming community of Arvada, Colorado. It is the second longest continuously running festival in Colorado. Beginning in October, 1925 to celebrate the completion of the first concrete road between Denver and Grandview Avenue in Old Town Arvada.

We volunteers have committed to continue this historic event and create family oriented activities to entertain Arvadans of all ages creating the best memories to be shared by all for generation after generation at all family gatherings.

This community tradition has been inspired, created and overseen by volunteer Arvada citizens, The Arvada Jaycees and the Arvada Chamber of Commerce over the years. Today, a variety of Arvada citizens and neighbors produce and host this cultural and historic celebration of Arvada, with the oversight of the Arvada Junior Chamber Foundation's 501 (c) 3 status. Our Festival and Parade stands out from others due to our historic commitment supporting our families, old time festival traditions, with an emphasis on free or affordable activities for all.

One of our sponsors:

Home Advisor where you can find the TOP CONTRACTORS IN ARVADA, CO !! 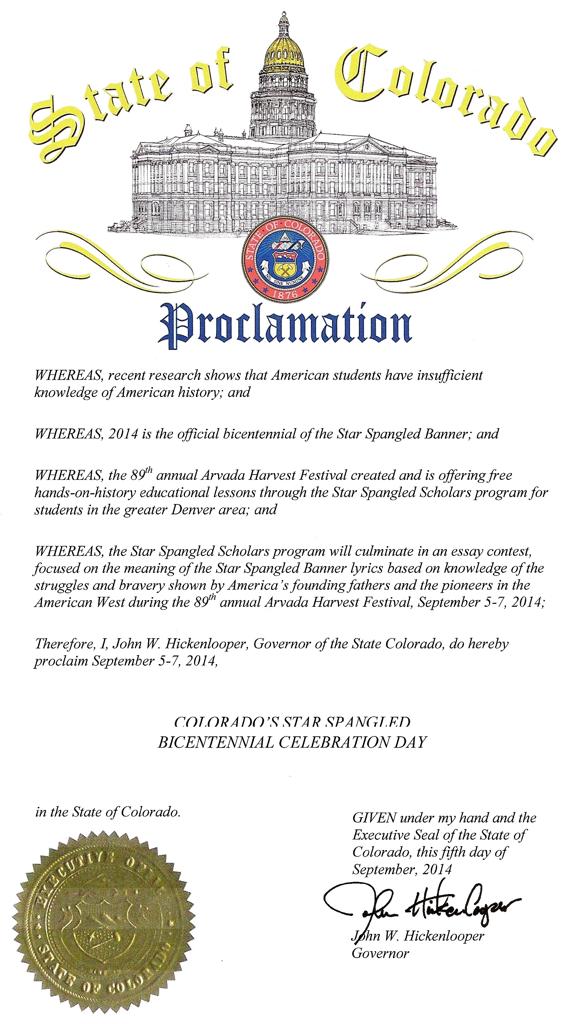 Founded and created in late 2013, Star Spangled Scholars is on a roll. We began humbly, supported by a generous grant from Daniels Fund and in-kind support from Arvada's Country Buffet. We are committed to offering this interactive, hands on history program to kids and families free of charge. Our mission is to build "heart" knowledge of what it took to found our great country, to settle the wild American West - and in doing so, building a sense of "Americanism" in our kids that is rooted in the appreciation of our founders' determination, resourcefulness and sacrifice. We've hosted two open houses, provided programming for fifth graders at Arvada K-8 and Hackberry Hill Elementary, made presentations to the spring break camp kids at Buckley AFB, presented to a "Whiz Kids" group in Lakewood and provided special Father's Day programming for the Arvada VFW #4331 membership and their kids. We offered a special summer camp program for 150 kids at the Susan M. Duncan YMCA on June 30th. The "campers" made "jumping jack dolls" and "salt cellars" (aka, cootie catchers). Kids of all ages sang rousing versions of "Do your ears hang low . . . " and the Star Spangled Banner! Harvest Festival attendees are encouraged to visit the "Star Spangled Scholars Living History Camp" in the Kid Zone at McIlvoy Park. School and other kid/youth group presentations will commence for academic year 2014-15. Contact Linda Olson Ferguson to request a presentation! Also - check out the Channel 8 coverage of this summer's Star Spangled Scholars presentation at the Susan M Duncan YMCA, http://youtu.be/uqZkYlaUmns.

We are honored to have our first sponsor for the Star Spangled Scholars program in 2014!  Thank you Daniels Fund for being a "Patriot Sponsor"!

Consider donating at Harvest Festival if you want to support our troupes!!

Please consider donating at the Harvest Festival Information Booth!!  Bring Golf Balls (New or Used!)   - If we get used ones, we will have kids decorate them for the soldiers to surprise them!   We will take Golf Clubs, or any accessory as well.  To donate monetarily, please email us at arvadaharvestfestivalcommittee@gmail.com then we will send you the instructions to do a monetary donation.

Click on the picture and you can see more what you would be supporting!!!